3D Nanoprinting Techniques for the Medicine and Robotics Domain
Home

3D Nanoprinting Techniques for the Medicine and Robotics Domain 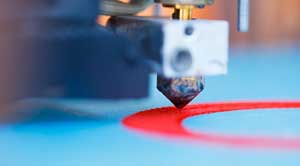 Experts have created the first 3D-printed fluid circuit element that is so tiny that it can rest on a human hair. The diode ensures fluids move seamlessly but only in a single direction as it is a critical aspect for products like implantable devices that release therapies directly inside the body.

The microfluidic diode further outlines the first use of a 3D nanoprinting strategy that breaks through previous cost and complexity barriers thereby hindering the progress in areas from personalized medicine to drug delivery. The ability to dramatically decrease the size of 3D printed microfluidic circuitry introduces a new era in the domain of pharmaceutical screening, medical diagnostics, and microrobotics.

Scientists have in recent times have tapped into the emerging technology of 3D nano printing to construct medical devices and create "organ-on-a-chip" systems. However, the difficulty of pushing pharmaceuticals, fluids and other nutrients into such small environments without leakage, and the expense of overcoming those complexities have made the technology impractical for most applications that demand precise fluid control.

Instead, researchers were restricted to additive manufacturing technologies that print features significantly more significant than the new UMD fluid diode. This put a limit on how small one’s device could be. After all, the microfluidic circuitry in the microrobot can't be larger than the robot itself.

A process known as sol-gel allows one to anchor their diode to the walls of a microscale channel printed with a typical polymer. The diode's minute architecture is then printed directly inside of that particular channel-layer-by-layer. As a result a fully sealed, 3D microfluidic diode is formed at a fraction of the cost and in comparatively less time than previous approaches.

The secure seal then achieved, will further safeguard the circuit from contamination and assure that any fluid that is pushed through the diode isn't released at the wrong time or place and will be further strengthened by reshaping the microchannel walls.

However, former methods demanded researchers to sacrifice time and cost to build similar components; this recent approach enables one to necessarily do this in comparatively less time and bring out better results. Researchers can now 3D nanoprint complex fluidic systems faster, cheaper, and with less labor than ever before.