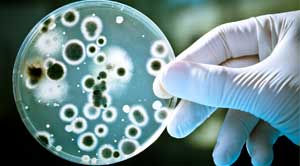 Antimicrobial resistance remains a serious concern for global health, and solutions are urgently needed to address this. This is not only the case in developed countries where several policies are governing the use of these drugs, and the ability to evaluate antimicrobial resistance levels exists. In the human intestine, there are trillions of microorganisms, mostly bacteria. Most of these are antibiotic-sensitive, but a significant number of bacteria in the human intestine have mechanisms that make them antibiotic resistant. Researchers, however, still lack a mechanistic understanding of the genes in gut bacteria that confer antibiotic resistance.

In collaboration with Professor Willem van Schaik at the University of Birmingham, a team of researchers led by the National Institute of Agronomic Research (INRA) in France developed a new method for identifying resistance genes in gut bacteria by comparing three-dimensional structures of known antibiotic resistance enzymes with the proteins produced by gut bacteria.

It is essential for antimicrobials to save lives. Widespread concern has resulted in a plethora of government and agency reports advocating less and better use of antimicrobials, better control of infections, and new drug development. However, as antimicrobial resistance becomes increasingly widespread without any plausible association with the use of these drugs, other strategies need to be taken seriously to prevent the emergence and spread of antimicrobial-resistant bacteria.