Care to Translate: Solving the Language Barrier in Healthcare

It was just another day at a local clinic, when suddenly, the receptionist noticed a man passed out near the waiting area. She rushed to his side and asked, “Is everything alright?” The man stared at her blankly. She then called the relevant medical staff for help. When inquired about the situation further, someone pointed at the patient and said, “Intoxicado!” What the person meant to say was ‘nauseated,’ but the medical personnel interpreted the word to mean ‘intoxicated,’ and hence, treated the patient for intoxication. Later, it came to be known that the man was indeed suffering from a brain aneurysm. The misdiagnosis not only caused the man detrimental side-effects, but the clinic was also charged with a costly lawsuit. 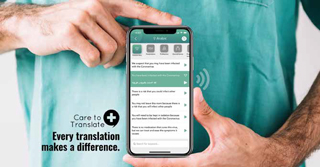 This tragic incident shows how the misinterpretation of a single word can also be life-threatening in the healthcare landscape. And, this is not an isolated instance. Due to language barriers, people are struggling every day to access even the most essential health services. This glaring problem in healthcare grabbed the attention of a small group of medical students from the Karolinska Institute, a medical university in Sweden.

In the fall of 2015, the determined team formed a non-profit organisation and developed an app that would help medical personnel all over the world breakdown the cultural and linguistic siloes. Powered by the app’s success and under the leadership of Linus Kullänger, Martin Schalling, Annie Backman and Maja Magnusson, the non-profit organisation evolved into Care to Translate, a company that is mitigating language barriers in healthcare one step at a time.

“Being from the medical field myself, I know first-hand how difficult it is for physicians to interpret non-native speakers,” says Linus Kullänger, who is now the CEO of Care to Translate. Even if hospitals and clinics hire interpreters, the physicians have to wait until the interpreter arrives, which is not an ideal option in case of emergencies. Another problem with interpreters is that they are not aware of medical terminologies. In a landscape where even one wrong word can lead to catastrophic outcomes, physicians must consider the translations with a grain of salt. With Care to Translate, the physicians, nurses, and other medical staff can communicate with non-native patients instantly and clearly. The application offers medically, contextually and culturally verified translations in over 30 languages. Even for healthcare establishments that employ professional interpreters, the Care to Translate application can complement their services during non-office hours, especially in ER departments.

The application can be downloaded on any smart device running on iOS and Android platforms. It comprises preloaded phrases in organised playlists, from which the patients and physicians can choose the most relevant queries or replies when communicating with each other. For instance, the COVID-19 playlist will contain phrases most pertinent to symptoms of the disease. Likewise, the application also includes several other playlists ranging from flu to cancer. The seamless UI/UX functions of the app support both text and voice formats. Based on the subscription, the hospitals and clinics can use the Care to Translate app for any number of devices.

Similarly, for patients, the company offers a free version of the application with a simple and user-friendly interface.

It is designed to help non-native speakers effectively communicate their problems to healthcare professionals and get accurate diagnoses. This is especially useful for individuals who live outside their country of origin or who travel abroad and need to visit a healthcare clinic for emergency treatments.

With Care to Translate, the physicians, nurses, and other medical staff can communicate with non-native patients instantly and clearly

At the core of Care to Translate’s flexible application lies a simple and seamless integration process. As the first step of the onboarding process, the hospitals and clinics can directly contact Care to Translate to request a demo and create an account for the entire organization or selected departments. Then, the clients can either leverage the extensive suite of playlists built into the application or set up their own playlists based on their requirements. When the users first log in to the app, they are taken through an onboarding process that explain the exact workings of the software.

One of the main factors that make Care to Translate an optimal choice for patients and physicians is the privacy that it offers. The application eliminates the need for third-party interpreters having to participate in the confidential patient-physician conversations. For instance, in many cultures, mental health conditions are viewed with a certain stigma, because of which the patient might be reluctant to share their personal details in front of an interpreter. With the Care to Translate app, the patients can directly communicate their health conditions with the doctor using verified phrases from the playlists. Since the application maintains complete patient anonymity and lays no claim on patient information, it ensures more reliable patient-physician confidentiality.

These superior functionalities offered by the Care to Translate app have made it an invaluable asset during the COVID-19 pandemic. During the spread of the virus, the application helped countless immigrants and travellers to interact with healthcare personnel at the testing clinics. “We reacted swiftly and launched several free versions of the application to assist patients in getting medical care in foreign countries,” enthuses Kullänger. Even many hospitals in Sweden deployed the Care to Translate app to tackle the inflow of patients. It helped the health professionals communicate the necessary precautions and ease the panic caused by the virus outbreak.

Alongside the COVID-19 front, the Care to Translate app has also played a crucial role in the Greece refugee camps. The company was contacted by several non-profit organisations to assist them in translations. “The lack of personnel and budget was hindering these organisations, as they did not have the monetary support to invest in interpreters,” explains Kullänger. Realising their difficulties, Care to Translate decided to offer them free versions of their application to assist them in communicating with refugee patients and providing them with the care they needed.

Behind all these accomplishments is Kullänger and his co-founders’ humble dream of making a difference in the healthcare world. Treading on this path of progress, the next step for Care to Translate is to replace interpreters completely and facilitate a seamless medium of communication between physicians and patients. With over 175,000 users, the company is fast spreading its roots around the world. It already has substantial user bases in Turkey, Germany, and the U.S., “We are constantly adding new languages and content to our application to increase usability for all markets globally,” says Kullänger. As it continues on this blazing trail, there is no doubt that Care to Translate will create a world of difference in the healthcare domain. 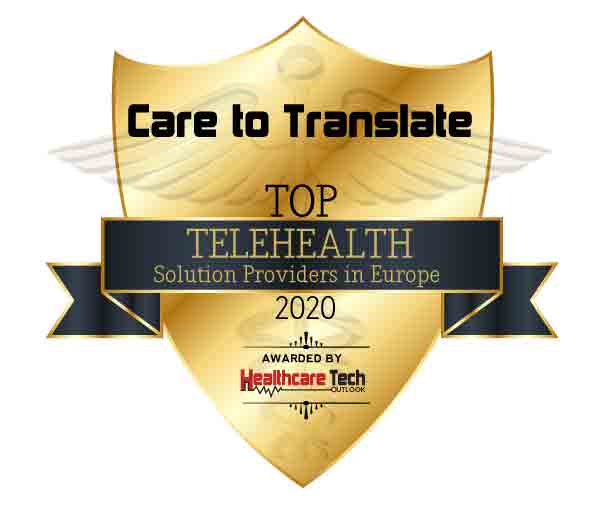 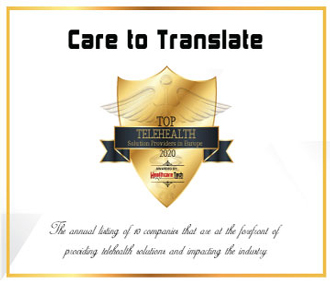 Description
With Care to Translate, the physicians, nurses, and other medical staff can communicate with non-native patients instantly and clearly in over 30 different languages. Even for healthcare establishments that employ professional interpreters, the Care to Translate application can complement their services during non-office hours, especially in ER departments. The application can be downloaded on any smart device running on iOS and Android platforms. It comprises preloaded phrases in organised playlists, from which the patients and physicians can choose the most relevant queries or replies when communicating with each other. For instance, the COVID-19 playlist will contain phrases most pertinent to symptoms of the disease. Likewise, the application also includes several other playlists ranging from flu to cancer 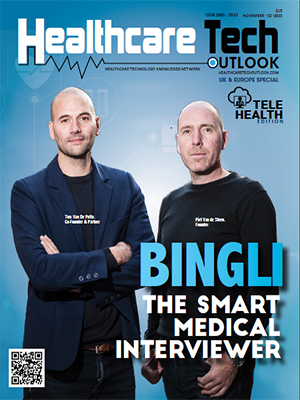