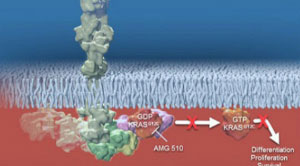 Amgen’s new drug steals the show by targeting the “undruggable” disease and poses competition in front of others in the market.

FREMONT, CA: Amgen cancer drug made a splash at this year’s American Society of Clinical Oncology (ASCO) annual meeting, as its experimental cancer drug AMG510 has shown activity in patients with colorectal and appendiceal (appendix) cancer. It was the first drug of its class to post medical data.

Amgen’s second-quarter revenue fell three percent due to more competition for its older off-patent drugs, but the experimental cancer drug AMG 510 has boosted the company’s shares by three percent to $181.There is a growing trend of precision medicines that aims gene mutations driving cancer despite in which organ the disease developed. AMG 510 has now become a participant in this trend.

Cowen analyst Werber pointed out the new data “encouraging”, he added that Amgen is leading with AMG 510 and the drug is now also showing primary response in GI tumors. Because of AMG 510, Neulasta and Sensipar are facing tough competition.

According to a study, AMG 510 shrank tumors and stopped tumor growth in many patients, showing it could control the disease in more than 70 percent of patients. In the case of colorectal cancer patients, nearly three-quarters of the evaluable patients achieved stable disease. Amgen tested AMG 510 is evolving as an agent to be used after the patient has exhausted other treatments.

Amgen comes into highlight with its KRAS inhibitor. The KRAS G12C mutation is common in many types of cancer but has long evaded treatment. It is seen in 13 percent of lung cancer patients, approximately three percent of colon cancer patients and two percent of all other solid tumors. AMG 510 of Amgen proves to be the first drug to show a change in KRAS mutations.

David Reese, Amgen Executive Vice President for Research and Development during a conference recently has said that the enrolment in Phase I/II trial had almost done. Further, the company plans to start enrolling patients in Phase II in the coming days.

Patient Appointment Reminder Service: Why Should You Use It?

The Most Effective Strategies for Preventing Healthcare-Associated...