WPI to Develop a New Level of Privilege for Amputees
Home

WPI to Develop a New Level of Privilege for Amputees 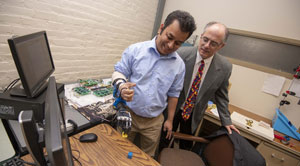 FREMONT, CA: Worcester Polytechnic Institute (WPI) professors have teamed up to develop wireless sensors to improve the performance of upper-limb prosthetics. The team is working with a Holliston-based prosthetic devices manufacturer.

To invent the new project, Professor Ted Clancy, electrical and computer engineering, WPI, is collaborating with Liberating Technologies and an occupational therapist. This wireless sensor technology will prove to be a boon for those who do not have limbs and will allow them to control their hand and wrist prostheses.

According to the report by Amputee Coalition, there are approximately two million people with limb loss in the U.S., and about 185,000 amputations occur annually.

Generally, these sensors are typically attached to the body via a plastic socket, but now in the transformation of the wired sensor to wireless, the process will vary. The prosthetic field is now adopting a new technique called osseointegration, which includes surgically implanting a metal rod into the bone to attach the device. Clancy planned to insert two silver solar-sized wireless sensors on arm muscle location, which might later increase up to eight sensors.

Xinming Huang, professor of electrical and computer engineering at WPI, asserted they are searching for devices with strong battery power so that sensors can be used throughout the day.

This research is done based on the reports of the collaboration between the WPI research team and LTI, which was held two years ago. The collaboration was to develop a hand-wrist prosthesis that would give users the ability to move naturally by enabling a hand and wrist to work simultaneously.

Testing on amputees will begin sometime next year, after which the technology will be evaluated commercially. It will be a helping hand for those without limbs. However, in the following project, researchers must address a variety of challenges to facilitate the technology.

Patient Appointment Reminder Service: Why Should You Use It?

The Most Effective Strategies for Preventing Healthcare-Associated...