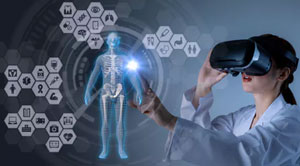 VR is expanding its reach across multiple industries, and healthcare is one such area where VR is transforming the norms, particularly in the field of ophthalmology.

FREMONT, CA: Until recent, virtual reality (VR) has remained relatively confined to a specific set of applications such as video gaming and 3D cinema. The reasons behind its minimal adoption in other areas are the technical problems and cost. Another major factor that hindered its proliferation was the lag time. For instance, for a shift in head position, the corresponding change in the virtual perspective took an instant to follow; the delay caused the user to feel sick. However, with rapid advancement in the technology and the hard work put in by various researchers across the globe are paying dividends now. VR is expanding its reach across multiple industries, and healthcare is one such area where VR is transforming the norms, particularly in the field of ophthalmology.

A significant offering of VR in medicine comes due to its ability to simulate real-life scenarios. Further, the traditional tests are often unable to detect the entire set of challenges faced by patients each day. Felipe A. Medeiros, a professor of clinical ophthalmology at the University of California at San Diego, along with his colleagues, is the first to publish a study using VR in this light. They used the Oculus Rift device to test the subject’s balance control against vection—the sense motion felt when the surrounding environment moves. He argued that the tests performed to evaluate visual loss in glaucoma are static tests. Instead, he used an immersive 3-D VR environment to assess the patient’s balance who had glaucoma. He observed that the patients with glaucoma had more erratic response than their healthy counterparts.

Another advantage that comes along with VR technology in Ophthalmology is its portability. Tests such as perimetry can be simulated in VR, eliminating the requirement of heavy, non-portable equipment. Working along the same lines, CREWT Medical Systems in Tokyo designed a head-mounted device that can suffice for a standard perimetry test without the traditional equipment.

It is impractical for the surgeons to increase the number of tests in the office. Using the head-mounted perimeter instead is better as it is highly portable. The challenge of creating a suitably dark environment for the test is also addressed as the head mount provides its version of a dark room.

The true potential of VR in the field of Ophthalmology is yet to be realized. However, the present advancement is undoubtedly an indication of the fantastic future that it holds.